Fairly recently I became an apprentice within the Aro gTèr tradition of Vajrayana Buddhism. It is very important to me that this unique blend of traditional Nyingma practice and our modern Western culture is able to survive and flourish. To that end I see it as very important that a centre is established to act as a base and provide continuity and focus. This is the Drala Jong project to purchase land and buildings on a modest scale in a peaceful and vivid rural setting. I wanted to do something to help bring this to fruition. 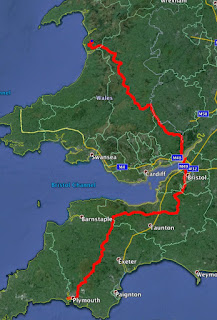 I had read Ngak’chang Rinpoche mention that he thought pilgrimages to sites of particular significance to the Aro gTèr tradition in this country would be beneficial, and one such site is Bird’s Rock (another being Southerdown). Since I have no time constraints I felt a walk to Bird’s rock from my home would be a great endeavour, I also had doubts about whether I was up to it. Like many plans that hatch in my imagination, this one might have been put on indefinite hold, but it seemed to have an impetus of its own, and importance outside ‘the Chris project’. When I mentioned it to my teachers they were immediately enthusiastic and supportive, and so I felt I had to see it through.

It took a while to get my fitness levels up to a level that would permit an average 15 miles of walking day after day. By early spring I felt more confident and took the plunge by publicising my plans and starting to gather route information and to book accommodation. I set off in late April and for a while entered a new dimension, that of the homeless itinerant wanderer. The goal was so far ahead that each day I saw only the path I was walking and the changing scenery around me. The first thing that struck me was the richness and energy of the British countryside in Spring. It was a veritable feast for the senses and, as well as banquet of outrageous colours and visual forms, there were smells and birdsong and feelings of pleasant fatigue in  the body. The route up through the SW peninsula is one I have driven close to many times, but at walking pace it all seems very different. There is time to appreciate the old farm buildings, crops and animals, wild flowers, woodland and even the transport infrastructure of railways and roads, from a new perspective.

It was nice to take stock at each high point of the ranges of hills behind and ahead. It was actually possible on a couple of occasions, in clear weather, to see Dartmoor and the hills of S.Wales and all the intervening ranges. Seeing where I had come from and where I was headed grounded me in the landscape. The weather was predominantly warm and sunny with wonderful clear blue space overhead and only occasional rain that was usually a welcome blessing. Approaching Bristol and in the Hafren forest were the only times when I became totally soaked. Crossing the Severn Bridge gave further exposure to elemental forces, this time wind that made it impossible to walk upright and in a straight line. The scenic highlights were almost too many to catalogue, Dartmoor, Exmoor, The Brendon Hills, the Somerset levels, the Mendips, Wye Valley, the Black Mountains and the scenery in mid Wales approaching Snowdonia all stand out as delightful places.

In a way I was sad, as the goal approached, that it would end but excited at reaching the destination and meeting the lineage holders Ngak’chang Rinpoche and Khandro Déchen and my own teacher and other apprentices who had all travelled to celebrate my arrival and to make a joint ascent of Craig yr Aderyn. On one level being with one’s lamas and fellow sangha members can seem like normal social activity, but beneath the radar of conventional mind all sorts of transmission is taking place. It would be nice to be able to recount this, but unfortunately impossible to describe. I am in any case a simple dolt who probably only appreciates a small fraction of what is happening at any one moment. Nevertheless the ascent through the special setting of that place in the company of lamas and the subsequent drive back to Cardiff are experiences I will long cherish; and I would warmly encourage anyone else, who is so minded, to seek out a similar type of endeavour. I met many kind and interesting people along the way as well and was reminded that we are all begininglessly enlightened beings inhabiting a wonderfully perfect world. Now it’s all fading into the past. When I look at the route on Google Earth I wonder “did I really do that?” Amazingly I must have!